Organic Chicken Feed – An Experiment in Mixing My Own

Not too long ago I shared a couple of posts about switching to organic chicken feed and saving money by mixing your own organic chicken feed. When I purchased Nature’s Grown Organic Layer Feed from our local feed store, I was a little bit disappointed with it. Although the girls’ egg shells were stronger, the yolks were lighter. I also found that the feed had a high percentage of finely ground grains that the hens didn’t want to eat. I started mixing it with water and molasses to entice them…but quite a bit of the fine stuff was going to waste.

I Tried to Save Money on Organic Feed

I switched over to mixing my own layer feed with yellow split peas and sunflower seeds for protein, corn for fat, and wheat, oats, and barley to round out the grains. I added Richmond’s mineral supplement and Fertrell’s Poultry Nutri-balancer. The supplements did not supply enough calcium so I also added oyster shell to their feed. Unfortunately they turned their little beaks up at the oyster shell. Consequently their eggs shells are often so thin that they get broken in the nest boxes. I also added up the cost of all of the ingredients and it wasn’t that much less expensive, plus I couldn’t find organic sunflower seeds.

I had hoped to save some money by mixing my own feed, but the plan seems to be backfiring. Not only are the shells thin, but the number of eggs has declined steadily. Besides the fact that they don’t want the oyster shell, they also pick out their favorite bits of feed… namely, the sunflower seeds and corn. Perhaps if they could free range for more of their feed they would have a more balanced diet. I’ve also considered mixing the supplements with some cracked grains and vegetable oil. But, gosh, the cost will go up even more if I buy organic vegetable oil!

With winter approaching and less green stuff growing in the pasture, it seems like the most prudent course of action would be to resume feeding my layers the Nature’s Grown Feed with a few scratch grains on the side. I hope to start sprouting some wheat soon to give them some extra energy and greens. But it’s back to a pre-mixed organic feed for this less than self sufficient homesteader…sigh.

Have you tried mixing your own chicken feed? Did you have problems with the hens picking out their favorite grains and leaving the rest? Did you find a good solution to the problem? 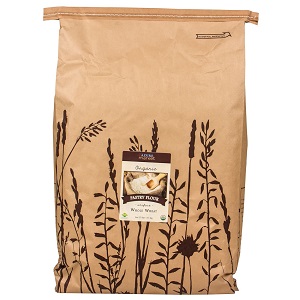